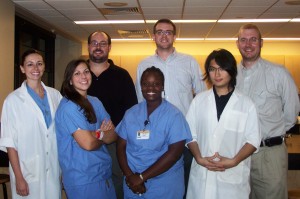 The lab held it’s second high school workshop several weeks ago, the first being our Inside Alligators workshop. I just got the CD of pictures, so its share time. Again we partnered with the Howard Hughes Medical Institute’s (HHMI) Maps in Medicine program, which organized 60 pan-Missouri High School students accompanied by a handful of their teachers. The students, most of which were in 10th grade, were spending an entire week on Mizzou’s campus as part of a Summer Academy, a science boot camp directed towards understanding infection, infectious diseases, biotech and the like while participating in a number of hand-on activities and lectures. They had already had a full day’s worth of activities by the time they came to us around 7pm on a Wednesday to learn about airway and lung anatomy as it relates to respiratory diseases, infections, other maladies.

Again, we had a mix of outstanding students helping out with the workshop including 2 Integrative AnatomyPhD students:Henry Tsai and Ashley Hammond, 2 Holliday lab undergrads: Cortaiga Gant and Rebecca Skiljan, as well as 2 senior Pathology Residents: Dieter Duff and Brian Odum. Everyone was responsible for particular workstations we had set up, although everyone got the chance to rotate around the room.  Our 4 stations included 1) Imaging and cross-sectional anatomy of the thorax; 2) General Airway anatomy using plastic models; 3) Histology and Pathology (led by our two Path Residents) and  4) Gross lung anatomy. The last station benefited from timing the workshop to follow on the heels of the summer’s Physical Therapy gross anatomy course so we could harvest about 20 pairs of lungs from the cadavers used. Students were able to dig out structures from within lungs, appreciate various pathological or disease conditions in the lungs, and generally have their way with them.

Each station was accompanied by worksheets asking the students to find things, think about structure-function and clinical problems, prescribe treatments, and map air and blood flow among other tasks. This was the second batch of worksheets like this I’ve put together, I’m getting better, but it remains challenging to appropriately steer the level of difficulty towards the students–they always end up surprising me in their knowledge, imagination, and ability to tackle some of the problems I’ve put before them. Like before, I’ll spam a bunch of pictures and let them to the talking.

I am an Associate Professor of Anatomy at University of Missouri-Columbia. I teach Anatomy for the Medical School. I conduct research on the evolutionary morphology of vertebrates, particularly the structure, function, and evolution of the feeding apparatus. Much of this involves studying the biology of bone, cartilage and muscle. of dinosaurs and fossil crocs. I have a great job.
View all posts by Casey →
This entry was posted in public education. Bookmark the permalink.